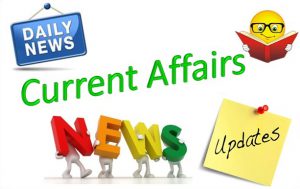 Gabon’s Constitutional Court ordered the Prime Minister Emmanuel Issoze Ngondet to resign and the lower house of parliament dissolved after legislative elections scheduled for the weekend were delayed.

India has surpassed France to become one of the world’s five largest military spenders, Swedish arms watchdog Stockholm International Peace Research Institute (SIPRI) Report. The other countries in top five include the US, China, Saudi Arabia, and Russia.

Liverpool forward Mohamed Salah has been named the Football Writers’ Association Footballer of the Year. The Egypt star – the first African winner of the award – also won the Professional Footballers’ Association player of the year award in April.

Former IRDAI member Radhakrishnan Nair has been appointed to ICICI Bank’s board as an Additional (Independent) Director for a period of five years. His appointment is subjected to the approval of shareholders.

India’s economy likely to grow at 7.3% this fiscal: Report

According to a BMI Research, a Fitch group company, the economic growth in India is expected to strengthen to 7.3% in financial year 2018-19 from 6.6 per cent in fiscal 2017-18, on the back of robust activity from construction, manufacturing, and services sectors.

The World Press Freedom Day was observed across the world on May 3, 2018 with an aim to celebrate the fundamental principles of press freedom, defend the media from attacks and pay tribute to journalists who have lost their lives while being on duty. The Theme for 2018 is ‘Keeping Power in Check: Media, Justice and The Rule of Law’.

Subhash Chandra Khuntia, a 1981-batch Indian Administrative Services (IAS) officer who was a former Karnataka Chief Secretary, has been appointed as Chairman of Insurance Regulatory and Development Authority of India (IRDAI).