The different services offered by the Indian Railways are as follows:

The Indian Railway is divided into 17 Zones and the zones are further divided into 68 operating divisions, headed by Divisional Railway Managers.

Types of Trains that run under Indian Railways

The Trains in Indian Railways are classified by an average speed, faster trains with few stops (halts) than a slower one, and also for long-distance travel. Most of the Express Trains are named with special names to identify them easily. The names of the trains usually represent the regions they connect or the route they traverse or person or a tourist spot connected with the train. Types of trains that run under Indian Railways is as follows:

The Rajdhani Express has limited stops with an air-conditioned facility. The train connects all the major cities to New Delhi. They have a top speed of 130-140 Km/Hour. 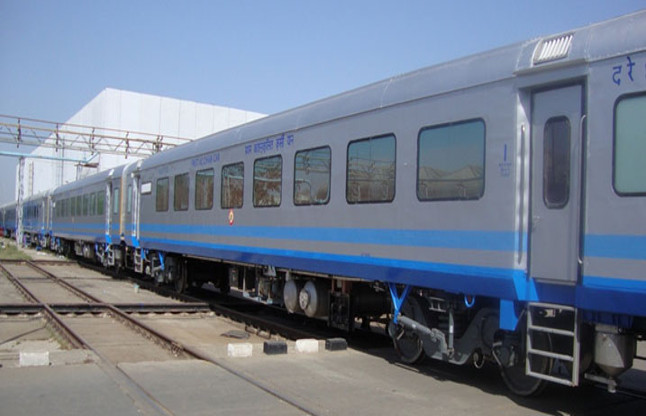 These are Intercity Trains for Day-time travel. These are air-conditioned and they make a round trip on the same day. These are Limited Stop Trains with Wi-Fi Facility. The Bhopal Shatabdi Express is the India’s second fastest train between New-Delhi and Agra. 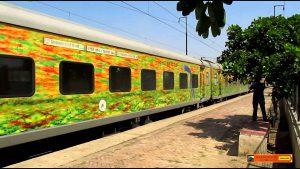 These are Non-Stop Trains (except for Technical Halts) which was launched in 2009. The train connects India’s Metro cities and Major city capitals. The speed is almost equal or more than Rajdhani Express. These trains are air-conditioned with one, two and three tier sitting. They have non-air conditioned sleeper accommodations as well. 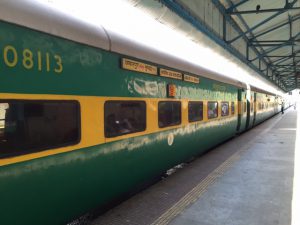 Garib Rath also called as “Poor People’s Chariot”. This train was launched in the year 2005 to provide air-conditioned long-distance travel to those passengers who could not afford standard fares of air-conditioned class in regular-fare trains. These are three-tier trains running with a speed limit of 130 Km/Hr.

The Sampark Kranti Express is a series of super-fast trains that provide a quick connectivity to the National Capital- New Delhi. Sampark Kranti trains charge the same fare as regular/ superfast trains and do not provide any special facilities. The main objective of this train is to reduce the travel time without compromising the passenger comfort. Initially, eighteen trains were launched out of which the Karnataka Sampark Kranti Express from Delhi Hazrat Nizamuddin to Yesvantpur was the first train to be launched in 2004. 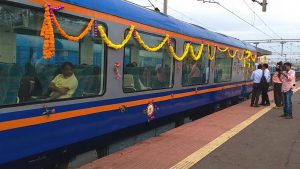 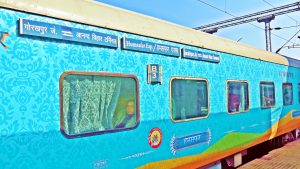 The Humsafar Express was launched on 16th December 2016. These are three-tier coach trains with an Air-Conditioned facility. These trains contain LED Screens that displays information about the stations and train speed, PA System, Vending Machines for tea and coffee, charging ports for Electric Devices, Bio- Toilets, Smoke Alarms, CCTV Cameras, Curtains and Heating and Refrigeration facilities for food.

Their trains offer Unreserved/ General Coaches that are designed by the Indian Railways. This train was first started on 4th March 2017 between Ernakulam Junction and Howrah inaugurated by Suresh Prabhu, the former Minister of Indian Railways. These have High-Speed LHB Coaches on peak routes to ease congestion. 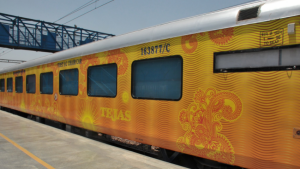 These trains are semi-high speed, air-conditioned which was launched on 24th May 2017. The train covers 551.7 Kilometers in eight hours in 30 Minutes. They have bio- vacuum toilets, water-level indicators, tap sensors, hand dryers, integrated Braille displays, LED TV for each passenger with a Phone Jack, Wi-Fi, Vending Machines, CCTV Camera etc.

The Suvidha Express is also called as Premium Express. This train was launched in the year 2014 to operate in the busiest routes. They follow dynamic pricing in fares similar to that of the airlines contrary to the standard one fare for one class travel generally followed by the Indian Railways. Only a 15-Day Advance Reservation Period will be permitted for this train. No cancellation, No waitlist ticket is issued or upgradation, No Tatkal Reservation, No Concession for Senior Citizens is permitted. Only e-tickets will be issued and vacant seats charting will be available at the respective current booking counters of the train originating station.

Now, since you got to know about the various types of trains that move around the Nation round the clock. Now we will provide you information about the Indian Railways Time Table.

The Indian Railway Time Table is the list of the Times that the different trains are scheduled to arrive and depart at a specified station. Due to the introduction of the Indian Railway Timetable, it is now easier to get the information on the Train Schedule and Booking the Tickets. The benefit of the Online Table is that it will save a lot of time. Our website will help you to get the Train Schedule of Arrival and Departure.

Just knowing the Train Schedule between two stations is not enough. If you want to enjoy the Train journey then you need to know some basic details about the Train Journey Schedule such as:

Through the Online Railway Timetable candidates can check the timetables for certain specific trains. By getting these timetable, passengers can easily adjust their travel itineraries.

Some Facts to know about Indian Railways

Indian Railways is known to be a monopoly. It is owned by the Indian Government. Evey day thousands of trains travel from one city to another city. Every train is scheduled at a particular time- their arrival and departure.