RRB Thiruvananthapuram has postponed the RRB ALP First Stage CBT that has to be held on 17th August 2018 due to the heavy rain and floods in Kerala. All the three shifts that were scheduled on 17th August 2018, has been postponed in all the centers located in the state of Kerala. The RRB Thiruvananthapuram will soon declare the revised dates on its website. The Board has already sent an e-mail and SMS to all the candidates who were about to appear the CBT.

Candidates must note that, the Railway First Stage CBT Examination will be held as per the schedule in other states despite of the State Holiday being declared in various states on the death of Former Prime Minister Shri Atal Bihari Vajpayee.

Candidates are advised to check the official website of RRB Thiruvananthapuram to get the revised examination notifications. 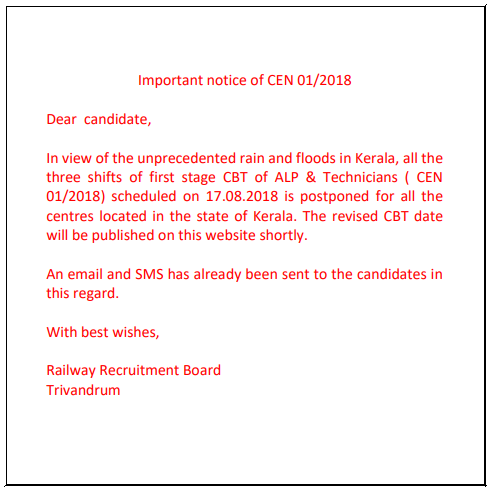 The 1st stage of Computer Based Test (CBT) is taking place in 3 shifts and the pattern of the questions is the same for all shifts.

Candidates appearing for the 1st stage of Computer Based Test (CBT) for recruitment of Assistant Loco Pilot (ALP) and Technician examination 2018 must keep a close tab on the official website to get further updates on the revised date.

The revised date of the examination will be announced soon by RRB on its official website.