RRB ALP Syllabus 2021: RRB ALP complete syllabus pdf is available here. you can start preparing for exam through RRB Assistant Loco Pilot Syllabus. The recruitment process of RRB ALP & Technician includes First Stage RRB ALP CBT Syllabus, Second Stage CBT Syllabus, Computer Based Aptitude Test and Document Verification. RRB Assistant Loco Pilot Syllabus (Group-C Syllabus) will help the candidate for preparation of RRB Exams. However, The exam dates have not been declared yet. It is expected that the Exam will be conducted in the month of August 2021. RRB ALP Exam Date will be released soon.

In this article, we have shared some essential information regarding the RRB ALP 2021 Syllabus PDF. This will help the candidates to start preparing for their RRB ALP 2021 Examination.

RRB ALP notification will be released soon. It is expected that Railway Recruitment Boards of Indian Railways will provide around 26,502 Vacancies for both RRB ALP (17, 673) and RRB Technicians (8829) Posts. RRB ALP Online Application form 2021 will start soon.

Before knowing about the Railway ALP syllabus, let us have a quick look at the ALP Exam Pattern of the CBTs: 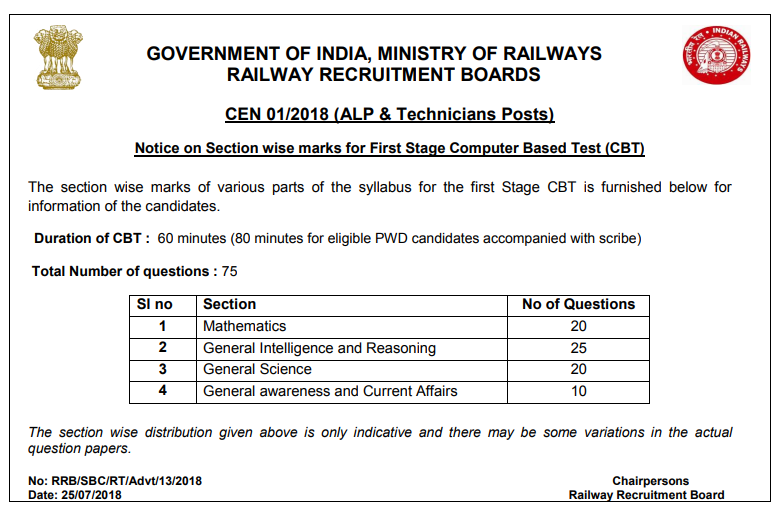 RRB ALP syllabus under this will cover Physics, Chemistry and Life Sciences of 10th Standard Level.

Science and Technology, Sports, Culture, Personalities, Economics, Politics and other subjects of importance.

RRB ALP syllabus for Mathematics, General Intelligence and Reasoning and General Awareness are same for both First and Second Stage CBT except Basic Science and Engineering.

The broad topics that are covered under this section are: