SSC CHSL Result: SSC has declared SSC CHSL 2017 Tier 1 Result on 15th June 2018 at ssc.nic.in. SSC CHSL Tier I 2017 Exam was held on 4th March to 26th March 2018. Many candidates appeared in  CHSL Tier-I Exam and are waiting to check SSC CHSL 2018 Result and cut off marks list post wise. We hereby inform all the candidates that your SSC CHSL Tier-I Result is declared on the official site of Staff Selection Commission i.e. ssc.nic.in. Candidates are able to check their results by finding their roll number and name in the PDF file.  In this article, we will provide details regarding SSC CHSL 2018 Result and Cut Off.

SSC CHSL Tier I Exam was successfully held in March 2018. Staff Selection Commission has declared SSC CHSL  Result (Tier-I) on 15th June 2018. The candidates who will appear for Tier-I examination will be able to check the Tier 1 result and qualifying candidates will be able to appear in Tier-II exam. Here, we have provided the direct link to view the SSC CHSL Tier-I Result 2018. You will have to find your roll number and name in the PDF. 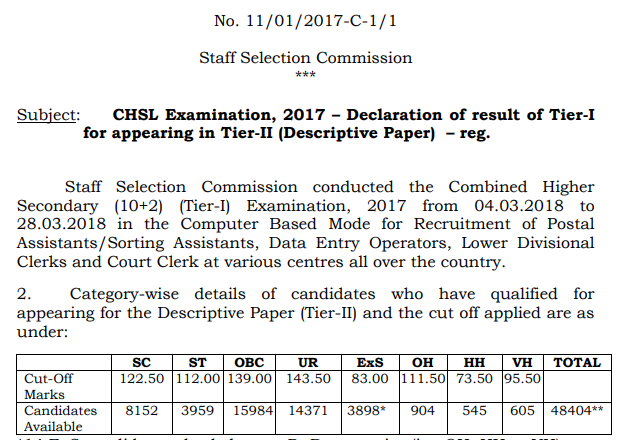 How to Check SSC CHSL Result

For SSC CHSL 2017, a total of 3259 vacancies are open for recruitment. The exam is held every year to select candidates to the posts of Lower Divisional Clerk/ Junior Secretariat Assistant, Postal Assistant/ Sorting Assistant and Data Entry Operator. After the declaration of Result, SSC CHSL Tier 2 will be conducted on 8th July 2018.. SSC CHSL tier 2 exam will be pen paper based. It will be a descriptive paper and will carry 100 marks in total. Candidates will be allowed 60 minutes to prove their writing skills. The Paper would comprise writing of an Essay of 200-250 words and Letter/ Application of approximately 150-200 words. The minimum qualifying marks in Tier-II would be 33 per cent.

The Result will be soon available on SSC Website. Candidates are requested to visit the website regularly. Only those candidates will be able to access the Result who have appeared the Examination.